Take me out the ball game…Baseball mitt cupcake Cake

I know baseball season is starting to wrap up and football is on most of the guys minds these days. My son wanted to go to a baseball game for his birthday and our AA team happened to be ending their season this weekend at home.
Thinking about a cake we thought about traditional sheet cake with a baseball field decorated on top. Pretty straight forward..

Well then I got something else in my head like a baseball mitt cupcake cake. I decided to get a head start incase it did not work and I needed to call the grocery store to order one. I froze the cupcakes I made earlier in the week for the apple cupcakes.

Shaping them was a vision my husband could not see as I moved them around. “Looks like a cougar paw, not sure mom” were some of the responses. Unfortunately I did not take a picture until after I frosted them b/c I did not think it was going to work. I arranged 12 cupcakes on a round plate and frosted them with milk chocolate frosting.

I had never made a cupcake cake before so this was an adventure in itself. You just frost the entire shape instead of individual cupcakes.

Here is the result of the initial frosting: 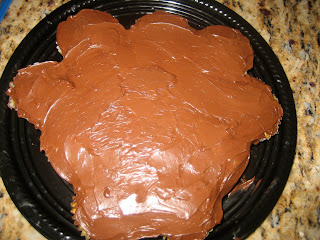 Oh yeah I see where this is going was the response from the family.

I then took another cupcake, and cut the bottom off slightly, frosted the entire cupcake (without the wrapper). I frosted the bottom as glue and placed on top of the mitt.

Decorated with some red frosting 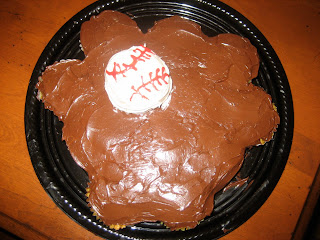 Well something was still missing:

I had some black decorating frosting and outlined the cake. If I had more of the chocolate I may have piped that thicker around.

Here it is, not so bad for a first time. Hope the kids will enjoy it. I am sure it will be quite messy:)  In perfect world I would have had brown cupcake liners for a more uniform look:) 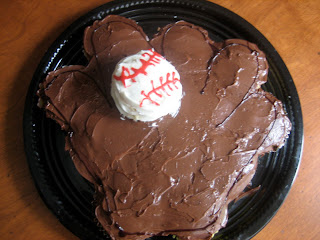 Favors will be simple just some baseball cards and candy. (baby ruth of course)
[shopeat_button]