Do you ever crave the flavors of a good old Steakhouse but don’t want to pay those prices, especially for a large family? Or maybe you just want a easy chicken recipe using flavored chicken that looks like it came from a steakhouse. 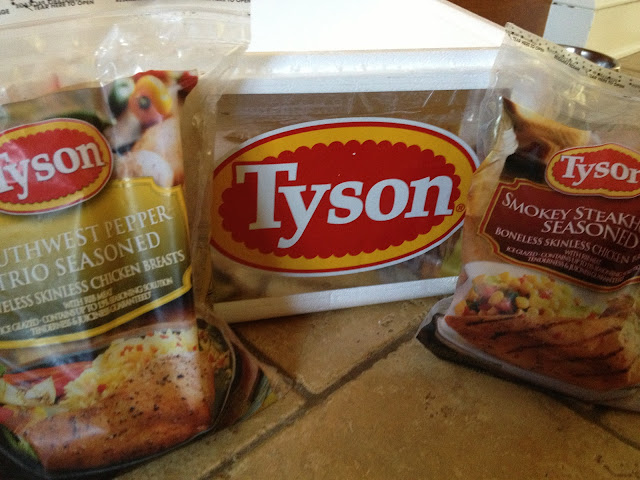 Tyson Chicken is introducing two new flavors to their individually frozen Chicken Breast line: Smokey Steakhouse and Southwest Pepper Trio. Thanks to Tyson and CBias I was able to try them before they debut at Walmart exclusively on the 9th of April. I was challenged to make a recipe using one of these new flavors and sharing them with you.

I make a lot of Tex Mex at home so thought initially I could easily use the Southwest Pepper Trio in a recipe. Simply baking it then adding it to tacos, quesadillas  or even fajitas would be a super easy chicken dinner with the pre-seasoned chicken breasts.

However, I thought I would truly challenge myself and branch out with a recipe using the Smokey Steakhouse Chicken. When I think of Steakhouse, chicken does not come to mind initially but I thought big Cobb salad, quick and easy chicken recipe if you ask me. (I made one here )

Once again wanting to try something totally different, I googled Steakhouse chicken and found a copy cat recipe for a franchised steakhouse. Since I was starting with pre-seasoned chicken breasts I adapted it slightly as well as baking the entire recipe. 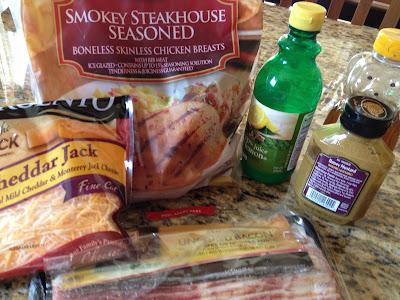 For our family of 5, I baked all 6 chicken breasts that came in our bag. 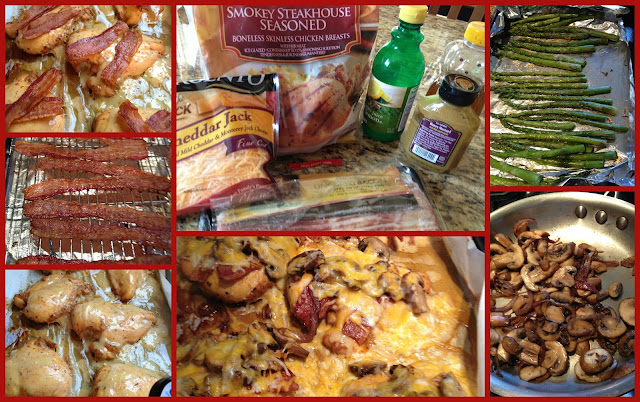 Bake your Tyson frozen Smokey Steakhouse chicken breasts on parchment paper or foil to reduce clean up. Bake for 30 minutes. After 30 minutes baste the chicken with the honey mustard mixture and cook 10 more minutes. Did I mention you can cook them frozen…major time saver in the kitchen. 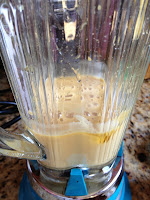 Mix together your honey mustard dressing in a blender and set aside.

On the stove top saute your red onions in a little olive oil and butter until almost caramelized. Then add the mushrooms and a little more olive oil if too dry and saute until done. 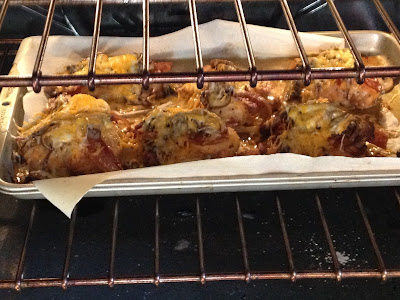 After baking chicken for 35 minutes,  top each breast with 2 slices of bacon (I thought this was too much so I split 1 piece of bacon in half. )

Follow this by covering bacon with mushroom/onion mixture and then 1/4 to 1/2 cup of the cheeses.

Bake for an additional 7 to 10 minutes or until the cheese is melted. Serve warm. 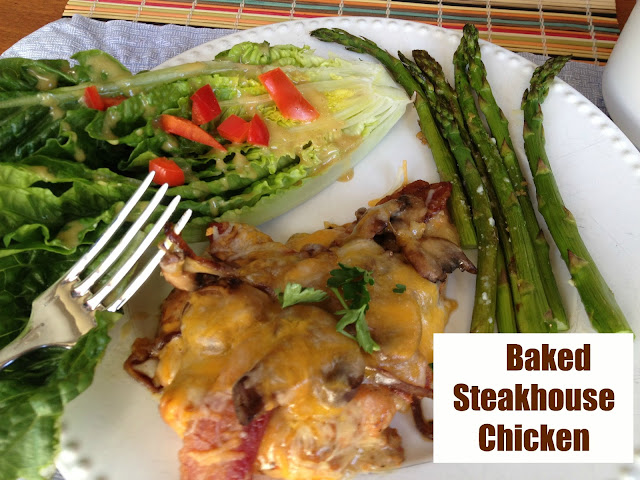 Wow this was amazing! My husband said this was the best chicken recipe I have ever made him. I was given an A plus. I think it was a mixture of the pre-seasoned chicken and as well as the combo of the rich toppings.

We served with a side of roasted asparagus and a half of head of Romain lettuce with some of the left over honey mustard dressing or try blue cheese or ranch dressing.
I would not say this is a low fat chicken recipe but I definitely adapted it slightly. Feel free to use turkey bacon, we used nitrate free, and low fat cheeses. IF you are lucky enough to have left overs, or maybe you want to cook the chicken breasts alone, I think they would be excellent in a Cobb salad. 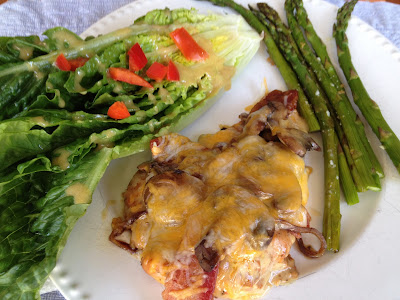 Hit a home run in your family this week with this amazing Baked Steakhouse Chicken. Half the work is done for you by purchasing the Tyson Flavored chicken breasts. Cook it with for your family or even part of an easy dinner party menu. You can also check out Tyson Foods on Facebook for other great recipes.

1. Use an electric mixer or blender to combine the Dijon mustard, honey, 1 1/2 teaspoons oil, and lemon juice in a small bowl. Whip the mixture for about 30 seconds.
2.Preheat the oven to 375 degrees F. Bake chicken for 30 minutes.
4. In a small frying pan, saute the red onion sliced mushrooms in the butter.
5. Brush each half baked chicken breast with a little of the reserved honey mustard marinade  being sure to save a little extra that you can serve on the side later with the dish.
7. Stack two pieces of cooked bacon, crosswise, on each chicken breast. my pieces were long so I just used one piece and cut in half.
8. Spoon the sauteed mushrooms & Onion mixture onto the bacon, being sure to coat each breast evenly.
9. Spread 1/4 cup of Monterey Jack cheese into each breast followed by 1/4 cup of Cheddar. I used about 1/4 cup total of the mixed cheese blend.
10. Bake the pan of prepared chicken breasts for 7 to 10 minutes or until the cheese is thoroughly melted and starting to bubble.
11. Sprinkle each chicken breast with 1/2 teaspoon parsley before serving. Put extra honey mustard marinade into a small bowl to serve on the side.

Be sure to check out my Google Plus Story too Here.
What do you think you would make with these New Tyson Flavored Chicken Breasts?

“I am a member of the Collective Bias®  Social Fabric® Community. This shop has been compensated as part of a social shopper insights study forCollective Bias®  and Tyson Foods #cbias #SocialFabric”