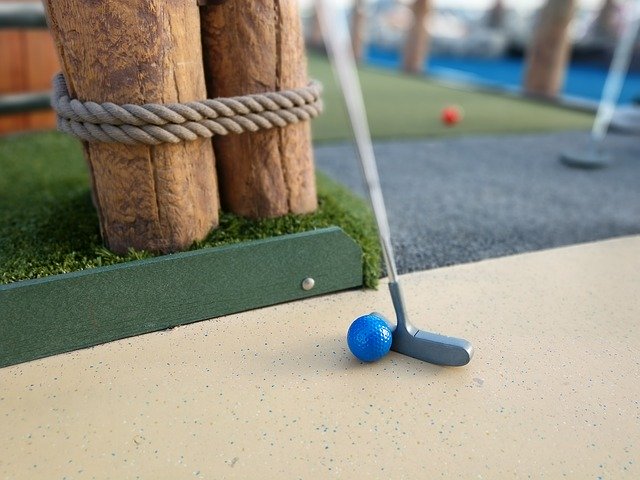 Theme parties are the best for kids birthdays.  It makes it easy to find invitations, games and cake ideas. Hope you get inspired by these Golf Themed Birthday Party for kids that you can use at a golf club or a putt putt course.  We updated this post from 2009. 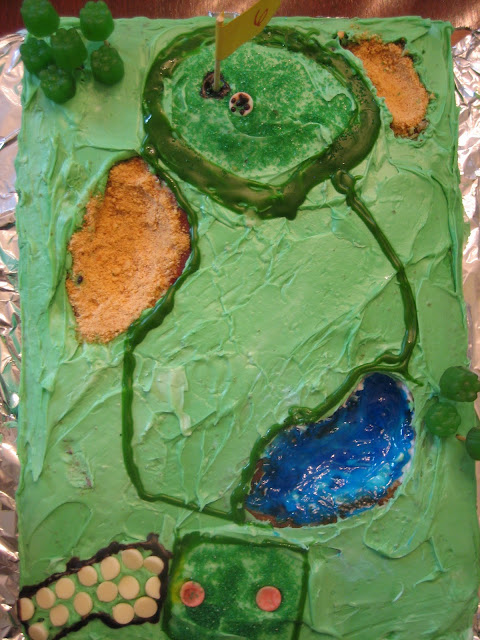 What Kind of Golf Themed Cake to Make?

When I received the recipes for this month by Suzy of Everyday Gourmet I was excited to find a cake recipe as my son’s birthday is just in time for the first Barefoot Contessa Recipe, Birthday Sheet Cake.

However, after looking on the food network reviews, I was unsure of the outcome.

Well, I did not make the chocolate frosting per the cake recipe and per another suggestion made it in a regular 9×12 pan and baked it for about 15 minutes longer.
Also, one suggestion I used, was just using 3/4 tsp of baking soda vs the 1 tsp in the recipe. The result was a moist, dense and lemony cake.
Since I was making it into a golf course I could not use the chocolate frosting but next time I will definitely try it.

How to Make a Golf Course Cake

To make the golf course cake, before frosting the cake I cut out the water hazards and bunker areas then added a little layer of frosting inside the cave.
Then frost the entire cake in green. Fill the bunkers with graham cracker crumbs and the water with blue gel icing. The cart path was simply white chocolate chips turned upside down. 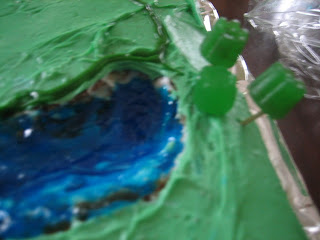 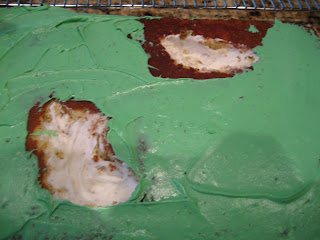 For the trees, I used Ju Ju bees some raised on toothpicks and some placed lower as bushes. 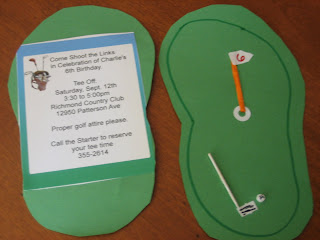 For the golf invitations, I simply used items I already had around the house, green construction paper, mailing labels, toothpicks, and markers.
To give depth to the golf ball I hole punched a circle out of pop dots and added dots.
I printed out the details onto card stock and simply glued them to the back of the green. 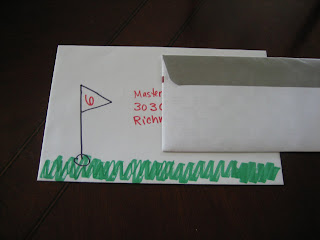 To make the invitations a little nicer, I adorned the envelopes with a little golf motif.
All of this was simple, inexpensive and made with things I found around the house in a pinch.

Well, the invites were sent now we are just hoping for good weather as we were planning a golf clinic for 5 boys at a local golf course. You really can’t bring this party indoors and we don’t even have a Wii!!

The preparations for this party were pretty simple as it was not at my house and the majority of the party was at the golf range and putting green.

I enlisted my father a lifetime golfer to the task of getting party favors at the club where I grew up. He simply picked up a few scorecards, golf tees, ball markers, and golf pencils.
I decorated some white bags similar to the invitation envelopes and added a bunch of candy. I originally thought I would add golf balls but thought of my own son with this weapon at hand!!

HOW TO SET THE GOLF THEMED PARTY TABLES:

I bought a dark green plastic table covers, white plates, and light green napkins.
For the table centerpiece, I bought a tin paint bucket and filled it with popcorn balls to resemble a bucket of golf balls. This was a really easy recipe as you did not have to boil the mixture to a certain temperature.
The weather was fine and the kids were all well behaved and surprisingly focused on hitting balls. I chose to make cupcakes because originally we were going to be on a picnic table under a tent near the golf range.
But I think kids like their own little cakes anyway. Make these deep chocolate cupcakes as I used a Barefoot Blogger recipe.

For thank you notes I really enjoy this idea and saves money and give parents an idea of what their child was doing at the party. I simply take a picture of each child doing an activity-this was easy each child taking a golf swing-or opening or enjoying the gift they were given.
For example, if your child was given a bike from his grandparents, just take a picture of him riding it. Then I make up a template in word to resemble the thank you cards that you fill in the blank for TO: and thank you for…. your friend…..
Just glue the picture on top of the card and have your child print in the details. The kids will like seeing themselves come in the mail. I can email you my template if you wish.