As I say goodbye to my 45th year this weekend, I started contemplating this monumental year. According to Dictionary.com A midlife crisis a period of psychological stress occurring in middle age, thought to be triggered by a physical, occupational, or domestic event, as menopause, diminution of physical prowess, job loss, or departure of children from the home. This seems pretty drastic but let me give you a little background as to why I am asking myself, Am I Having a Midlife Crisis or Just Several Midlife Crises? At first, I thought I was having a bad calendar year but when 2016 passed and things were still happening, I am now blaming everything on my 45th year of life.

So how does one know if they are facing a midlife crisis or just several mid-life crises? Having kids in my 30’s I think that I am still younger than I think. Why should I be feeling my age at 45 when my youngest is only 10? I thought I would opening analyze my 45th year as it comes to an end in a few weeks and get my readers, some who may be able to relate, help me figure out what is happening.

Let’s start with the Crises that have happened since April 2016. I am using the word crisis and it is most likely an exaggerated definition about the events in my life. In the big picture. these “crises” are really just bumps in the road, inconvenient happenings or part of getting older. 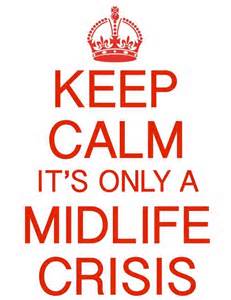 In chronological order that I can remember…. (another part of getting older, memory)

Things I have Accomplished in my 45th Year:

Not all bad things have occurred this year. I have also sought many new adventures or reexperienced things I had not done years throughout my 45th Year of life.

All in all, I need to feel blessed as the good experiences have outnumbered the bad. I guess when you have been so healthy for so long, you really start to feel your age when things happen. Not to mention my husband has threatened to trade me in for two 23-year-olds! What about in sickness and in health, I have a feeling we will both be testing our patience the next years of our marriage.