← Aetna Healthy Food Fight What are your children having for lunch at school today? →

Although I am not ashamed to use box mixes for many baking endeavours, I found this recipe in EVERYDAY FOOD

Magazine and could not resist trying a cupcake with a whole Oreo inside.

Because these treats were going to my son’s class I felt I needed to change the frosting so it was not pink. These would be especially cute at a baby shower with the pink frosting and I wonder if you could use blueberry jam and get blue…..

Anyway, these were super easy to put together and I even doubled the recipe in my bowl. I used a small ice cream scoop to distribute the batter and definitely used more than the tablespoon suggested in the recipe. I just felt more was needed to cover the Oreo. They are smaller than a traditional box mix cup cake and are flatter too. However, the fluff frosting more than makes up for that. 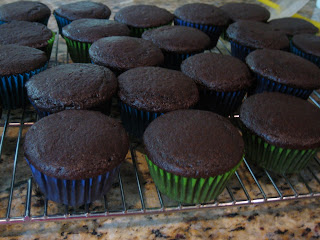 For my frosting I eliminated the raspberry preserves and just added more vanilla extract and confectioners sugar to the desired sweetness.

Doubling the frosting may not have been necessary. I had a lot left over and felt I put a generous amount on each cupcake. Maybe 1 1/2 recipes of the frosting would be better. Also I made these the night before and they were just fine. The recipe suggests serving immediately but unless I wanted to experiment for the first time with the frosting at 6am b/f school I was willing to take the chance. I did not put them in the fridge but in the cooler basement.

I could have served them just like the recipe… 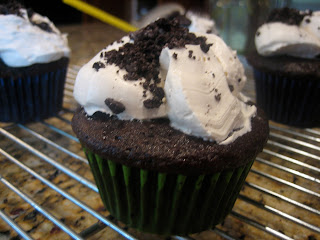 But thanks to my sister who I was talking to while on the phone, I crushed up some Oreos for decoration. 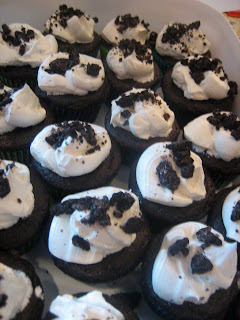 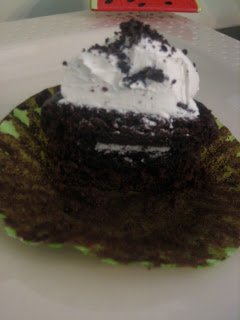 Unfortunately my son was not there to actually give out his cupcakes…the nurse called to say he had a belly ache. Well after 10 mins in the car he was just fine. I think he just did not want to be at school for his birthday. He said all the kids really liked them. Of course I had to taste the other half of from this picture. Will definitely make again.
Cookie Cupcakes with raspberry Frosting