Throw a MARVEL’s The Avengers: Age of Ultron Party

This shop about throwing the Avengers Party  has been compensated by Collective Bias, Inc. and its advertiser. All opinions are mine alone.#AvengersUnite #CollectiveBias

I never thought that at my age I would get into superhero movies. My kids, ages 9-14, never really asked to watch any of the Avengers movies when they first came out either. However, this summer, we started watching the Avengers series during our summer movie nights.

The entire family got into them, and I found myself growing increasingly curious about what was going to happen in the next film. Thankfully, when the movies became available on cable, we didn’t have to wait very long. MARVEL’s The Avengers: Age of Ultron was just released on DVD last week, so we decided to throw a MARVEL’s The Avengers: Age of Ultron viewing party, complete with an Avengers Popcorn bar. 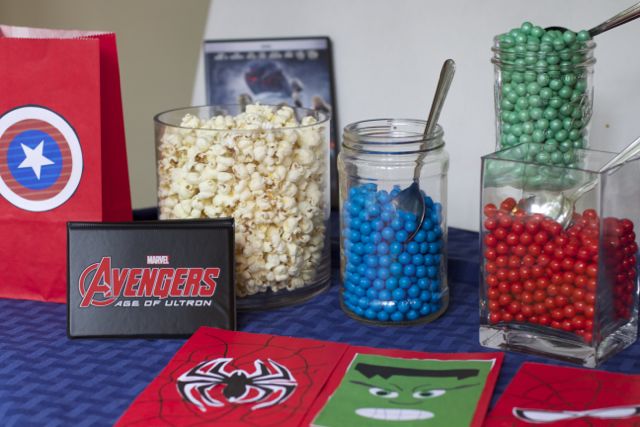 Throw a MARVEL’s The Avengers Party

I headed to Walmart where I had seen a good price advertised for the movie—cheaper than one movie ticket and popcorn. Before I hit the Entertainment department of Walmart, I passed the aisle with Halloween Costumes.  I could not resist all of the Avengers Costumes that I found, with a great selection for only $15 or so.

I had a really hard time deciding between Hulk and Captain America (I personally have a crush on Captain America’s actor). Knowing my boys, I purchased the the Hulk costume, complete with a “six pack” as my boys described.

When I got home and announced to the boys we were having an Avengers Party, even my husband was excited. What do you need at a movie viewing party? Popcorn, of course! I decided to make Avengers themed party bags to use for the popcorn bar. I created  free Avengers Mask Party Favor Bag printables for you to use.

I purchased small, red paper lunch bags for this project. First, print out the Avengers Masks you want to use for your popcorn bar. 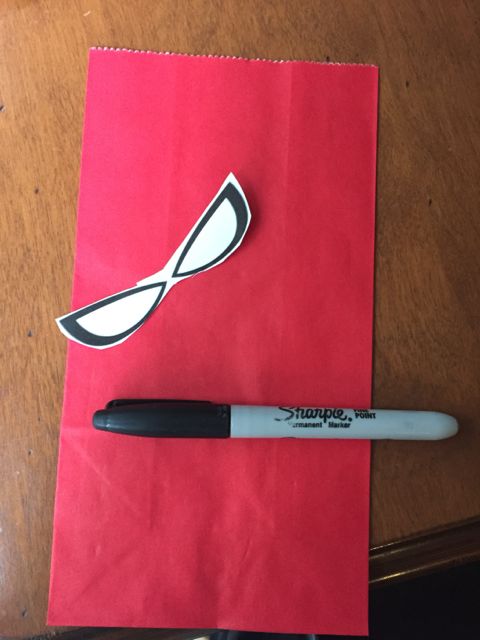 Although Spiderman is not in MARVEL’s The Avengers: Age of Ultron movie, most people love him, and the Spiderman bags are super easy to make. Using a permanent marker, create a spiderweb and then glue on the spider or the Spiderman eyes. 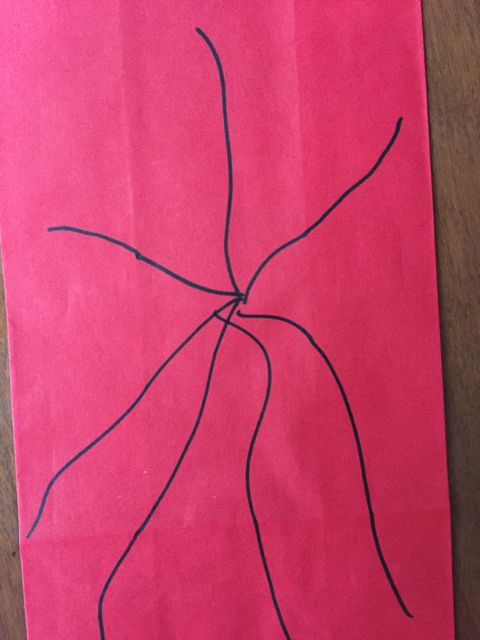 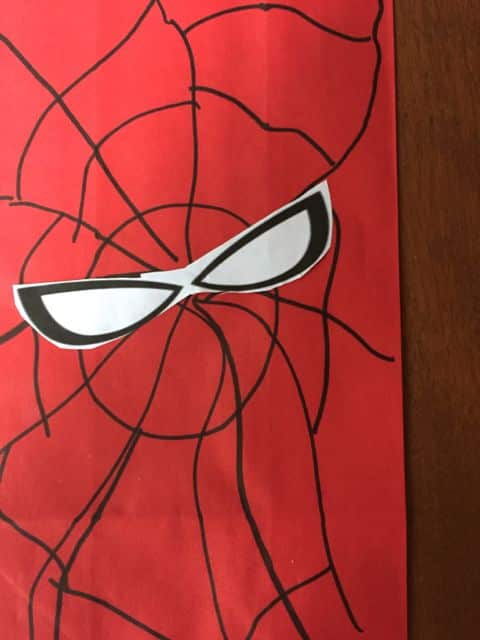 Create other fun bags by gluing on the other Avengers Masks printables. Now that the Avengers Mask Bags are complete, it’s time to set up for the rest of the viewing party. 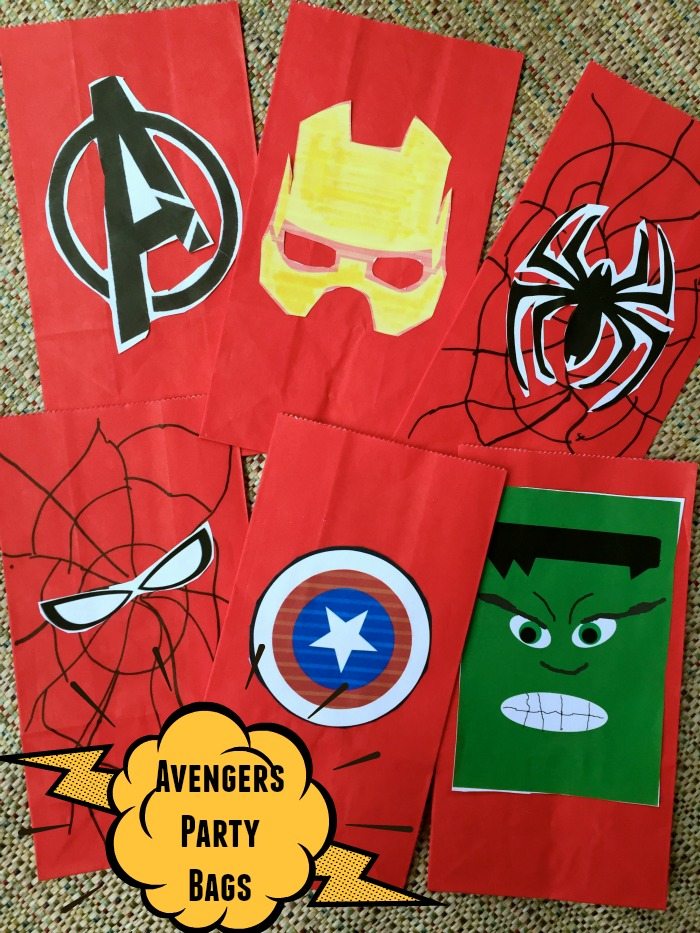 Set up your popcorn bar. I bought blue, green and red candies and put them in glass jars and vases. Don’t go out and buy anything—simply use old vases and glass jars you have around the house. 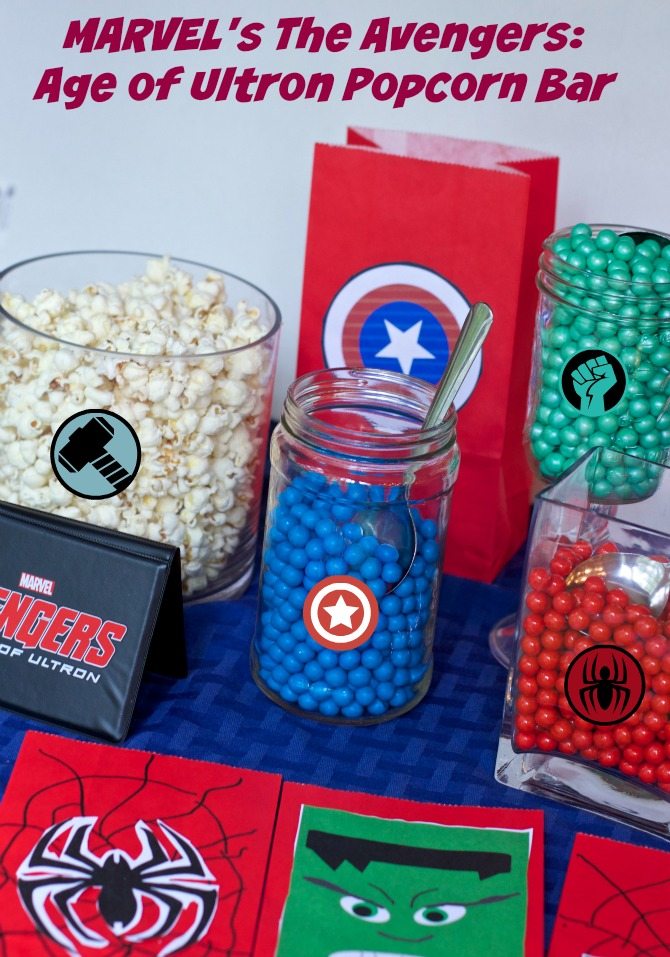 Your guests can then fill their Avengers Mask Bags with popcorn and candy of their choosing. 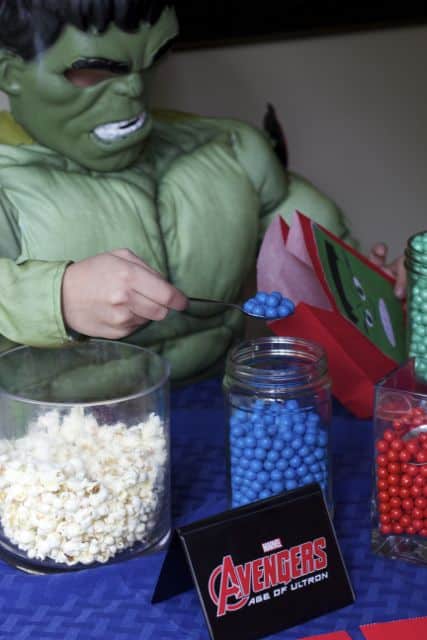 Of course, encourage your guests to dress up as their favorite Avengers character or buy each guest a costume from Walmart. 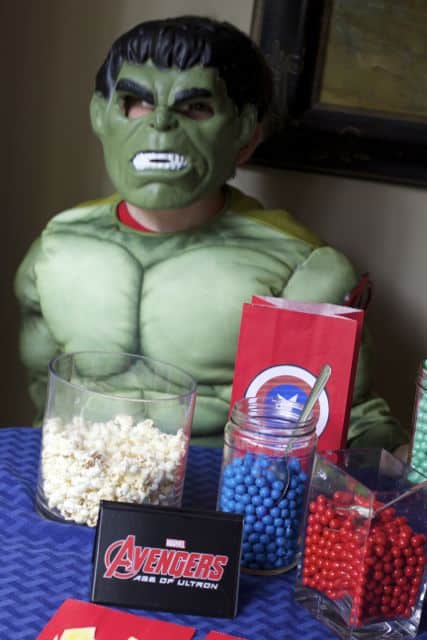 Get into the mindset of your favorite superhero and enjoy MARVEL’s The Avengers: Age of Ultron with family or friends. You can even get your kids their Halloween costumes too! 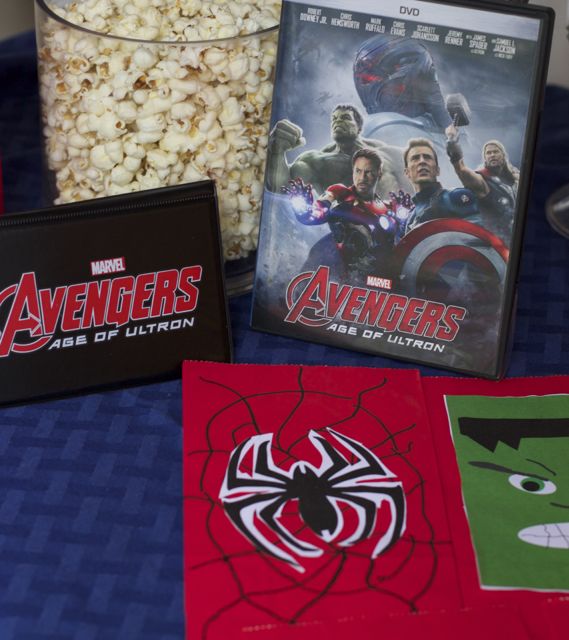 Who is your favorite AVENGERS character?