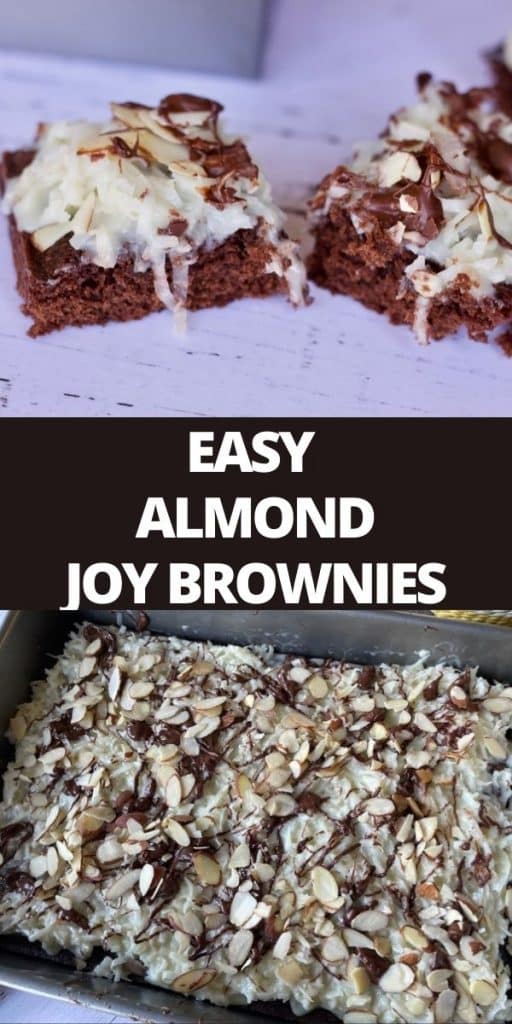 I know there are traditionalist out there.   But this particular day I needed to make two batches of brownies and decided to go with a box mix.  I love the ease of a brownie box mix but changing it up to something special.  I don’t think anyone knew they were boxed. 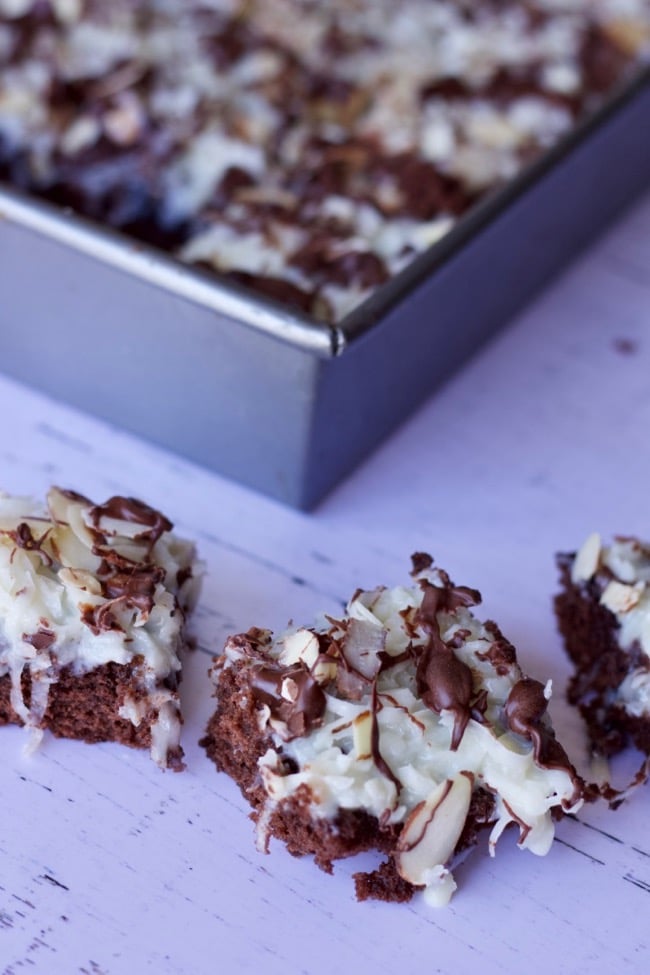 Use the best brownie mix you can find, and add about 1/2 cup of chocolate chips to the batter.

Bake per the directions, making sure not over bake the brownies.

While they are cooling, it is time for the super easy, but utterly delicious coconut topping.  I know not everyone enjoys coconut but the few that do, will be begging for more. 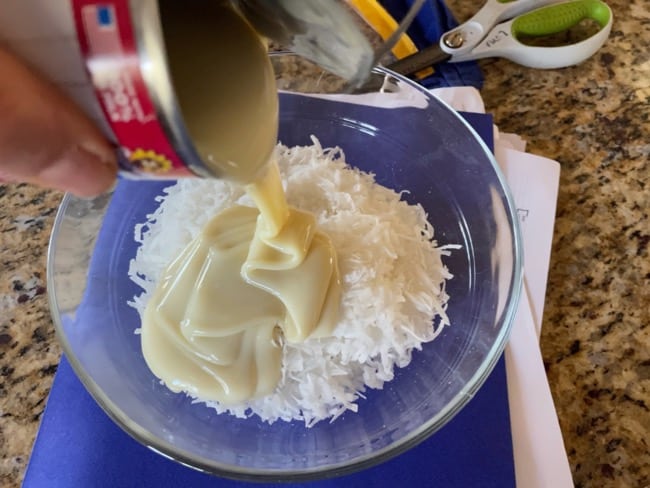 Just mix sweetened coconut with canned evaporated milk.   BOOM you have a topping. 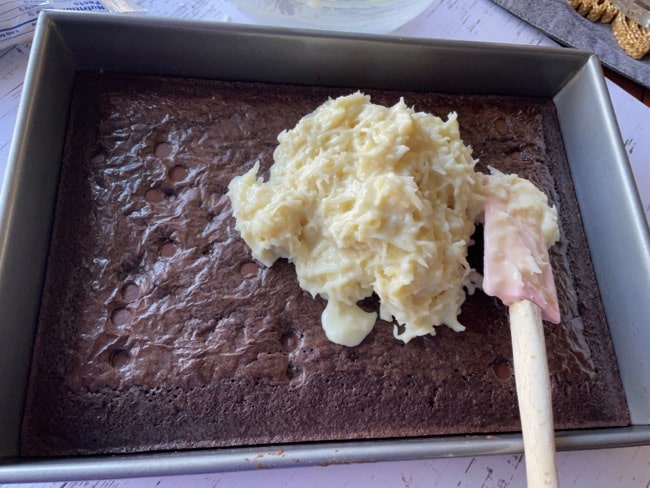 If the brownies are not fully cooled, this will be a sticky mess.    Top the coconut mixture with some sliced almonds and a drizzle of chocolate. 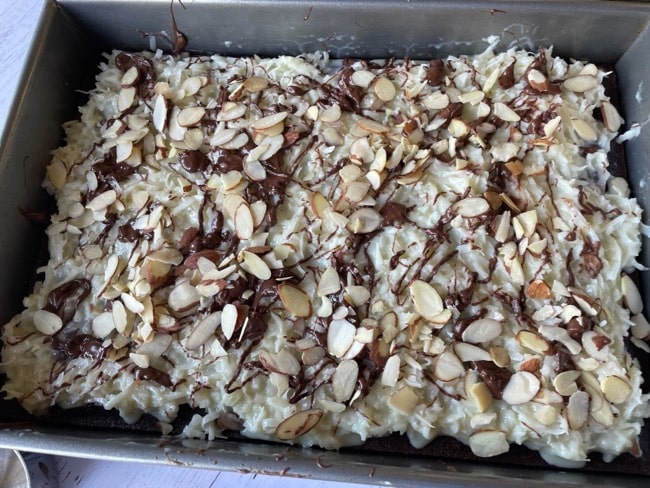 Once again you will have to resist cutting into these brownies.

The first time I cut into them, it was probably too soon.  I waited 2 hours. 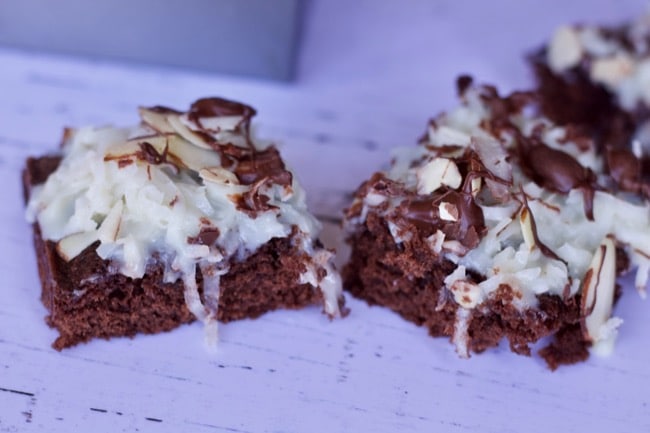 When I came back from work, 6 hours after making them, they had dried perfectly.

The birthday girl I made these for seemed very happy with resemblance to Almond Joy Candy Bars.  I do love coconut things, and I ate my fair share of the extras. 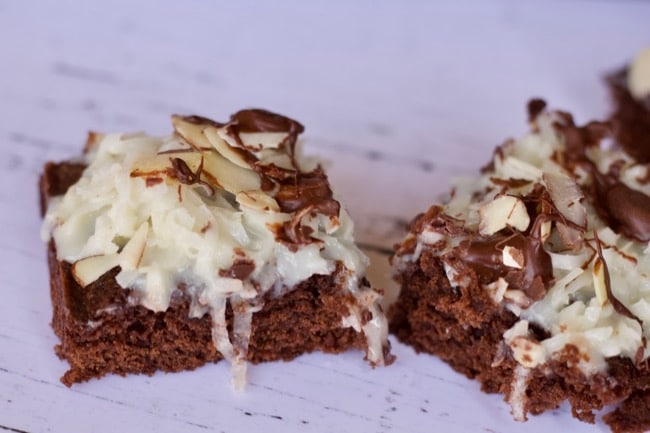 Can I use unsweetened Coconut

I used sweetened and if you ever ate a almond joy it is a sweet coconut mixture.  There is plenty of sugar in the evaporated milk, so you could give it a try.

CAN I MAKE HOMEMADE BROWNIES

I am not ever going to tell someone to only use a box mix. If you make your own brownie recipe, make sure it fits a 9 x 13 pan.  Or half the topping, but then you will have 1/2 of a can of evaporated milk left over.

Sometimes you feel like a nut sometimes you don’t.  Feel free to eliminate the almonds if you have allergies or just don’t like them.

Add 1/3 cup of chocolate chips to batter, add to pan,

Bake 25 to 30 minutes, or until cooked through. (per package directions)

In a separate bowl, combine the coconut and sweetened condensed milk. Stir until well combined.

Evenly spread the mixture over the cooled brownies.

Drizzle the melted chocolate over the brownies and top with slivered almonds.

Allow the brownies to sit out uncovered for up to 4 hours to set.