How to Make a Homemade King Cake Recipe 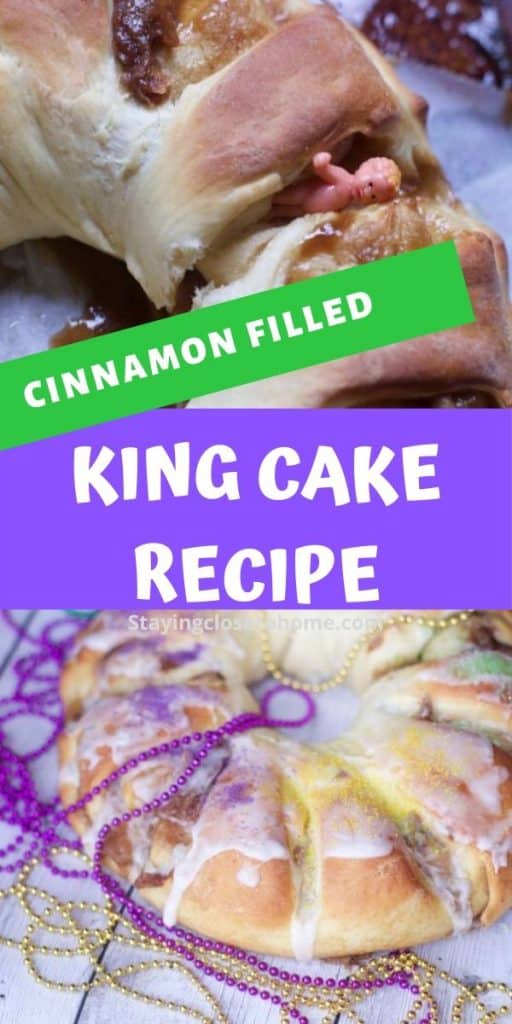 I first attempted a King Cake in 2012, this is my much-improved version in 2017! So happy to see that I can have luck with yeast recipes especially for special holiday treats like making a Homemade King Cake Recipe for Mardi Gras or my special Italian Easter Bread.

When I saw this recipe in Family Fun for King Cake in 2012, I could not resist trying it. The ones at the grocery are over $8 and how much could yeast and flour cost!!

Also, my husband sent me a link for a cake that was sent to his office by the parents of one of his co-workers from New Orleans and it was over $30 a cake.

I found the little babies at the craft store near the Baby/wedding shower supplies. I did not make this recipe this time just in case it was the reason for my lack of success. 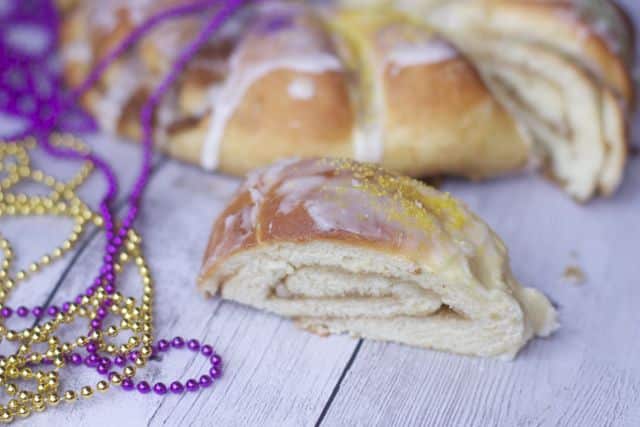 Whenever making a recipe that calls for yeast, be sure that you check the date and it is still fresh as bad yeast means not so good result! Since this King Cake Recipe requires yeast, plan on starting the recipe several hours before serving.
It can be made and served the same day without a problem if you give yourself time, remember there is at least 3 hours of the dough rising. 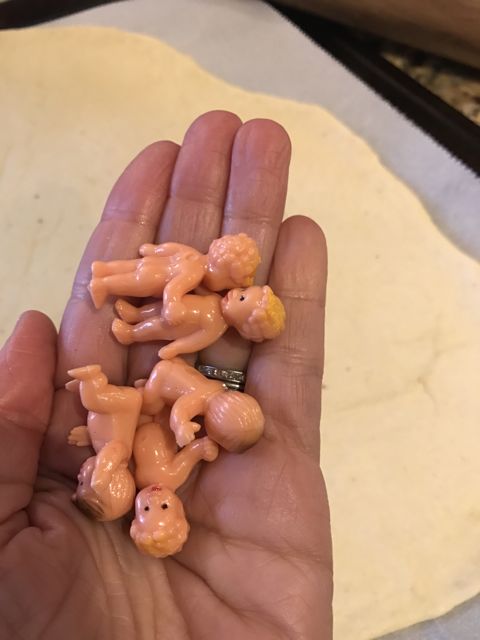 If you have a  Kitchen Aid Machine and dough hook or a bread maker, making the dough is a cinch. 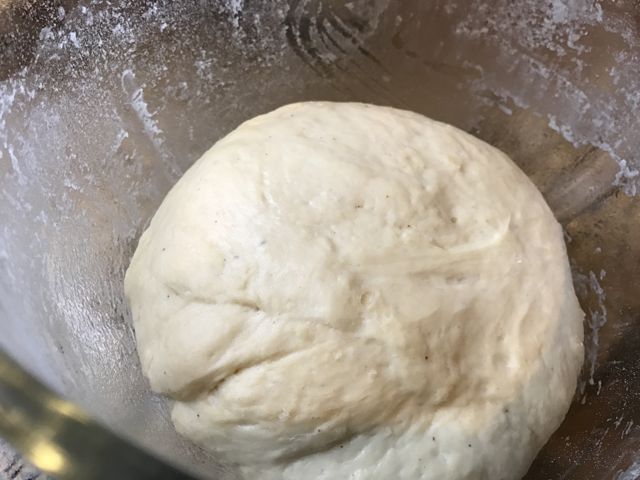 Love watching a successful rising of the dough. There is a sense of satisfaction you made it this far, don’t you think? 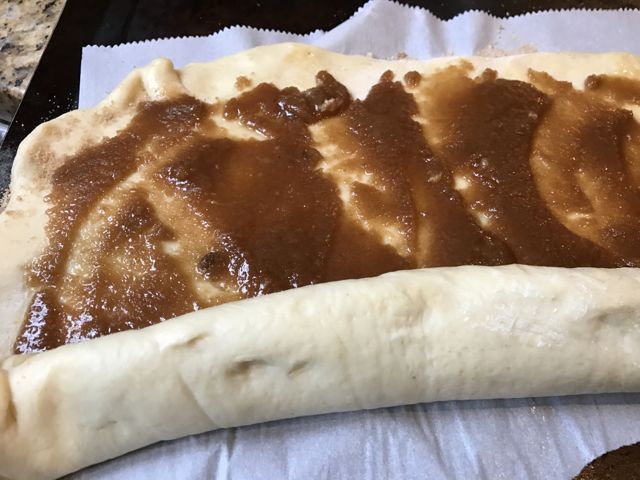 The recipe I used called for raisins and nuts, but I never recall eating a King Cake that had those ingredients so I skipped them and stuck with cinnamon and brown sugar. 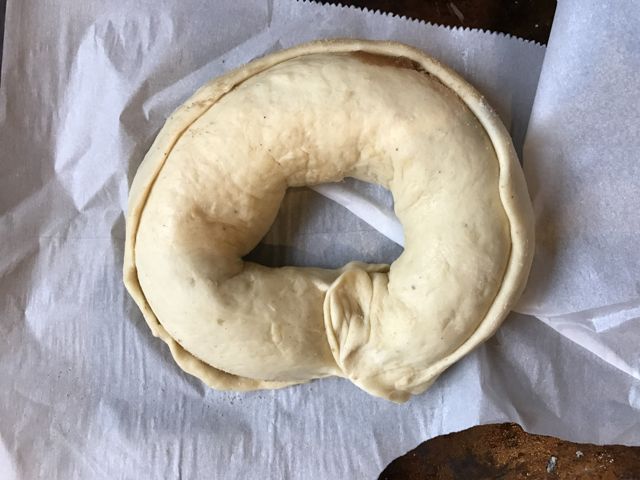 Making sure your King Cake is even was my biggest challenge and you can tell by the result the ends were much thinner and did not have many fillings. 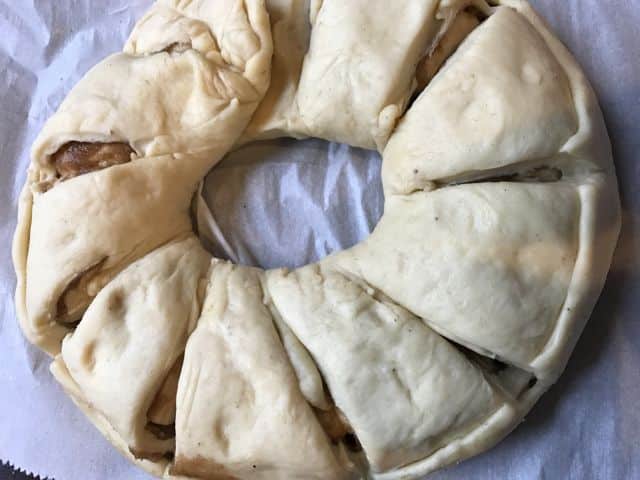 It is not time to allow the dough to rise again. Make sure you make your slits just a 1/3 of the way through the dough.
You can even put a ramekin in the middle in case you have some robust dough that wants to rise a lot. 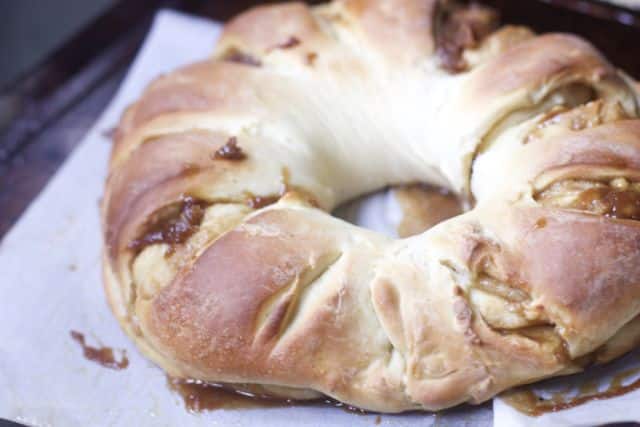 Bake this King Cake Recipe for 25 -30 minutes, checking often so it does not burn.
WHAT DOES THE BABY THE KING CAKE REPRESENT?
Traditionally, a small plastic or porcelain baby is hidden in the king cake. Originally, the baby was placed in the cake to symbolize baby Jesus. Today, the baby symbolizes luck and prosperity to whoever finds it in their slice of cake.
Add the Plastic baby AFTER it comes out of the oven! 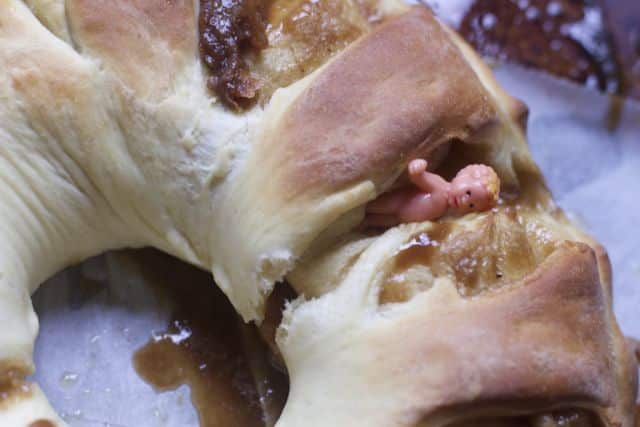 I think mine got a little too brown but nothing a little glaze and sprinkles can’t hide! 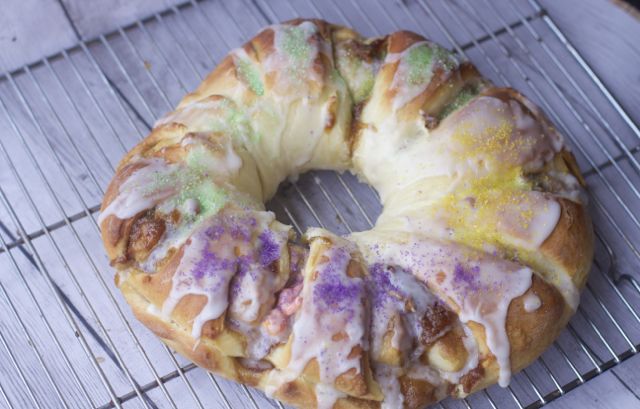 Allow the cake to cool completely or just to slightly warm b/f trying to move it as it is a little fragile due to the shape. 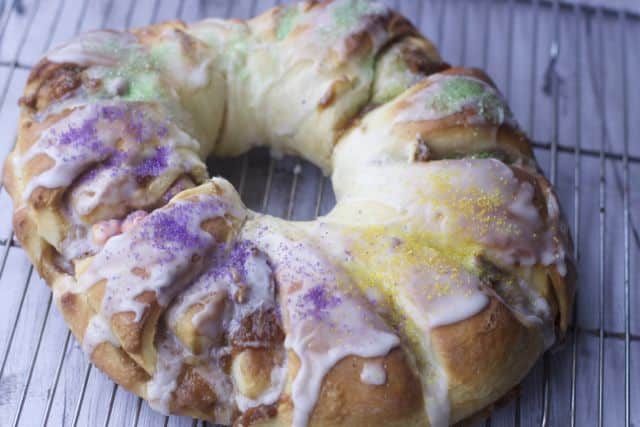 WHEN DO YOU EAT KING CAKE

Slice the king cake for Mardi Gras Recipe and enjoy it for dessert or for breakfast anytime from the Ephiphany, January 6th, and  Fat Tuesday.

I was thrilled with the result and ease of making my second attempt at King Cake Recipe.
What plans do you have for Mardi Gras? Maybe you want to make some Jambalaya?
Be sure to check out this post, if you are looking for meatless recipes for Lent.

Be sure to pin this King Cake Recipe for your next Mardi Gras Party or meal?

Scalding milk is making it warm but not boiling

As an Amazon Associate and member of other affiliate programs, I earn from qualifying purchases.