I am not sure what is wrong with me and recipes that involve yeast. I have attempted a few breads and cinnamon rolls recipes and they never seem to work out right. But when I saw a recipe for Pumpkin Cinnamon Rolls I could not resist the temptation to give it a go on more time, half knowing it might not work out. Even after proofing the yeast twice, because I wanted to be sure it was a fresh package, I still not sure what I could do better. 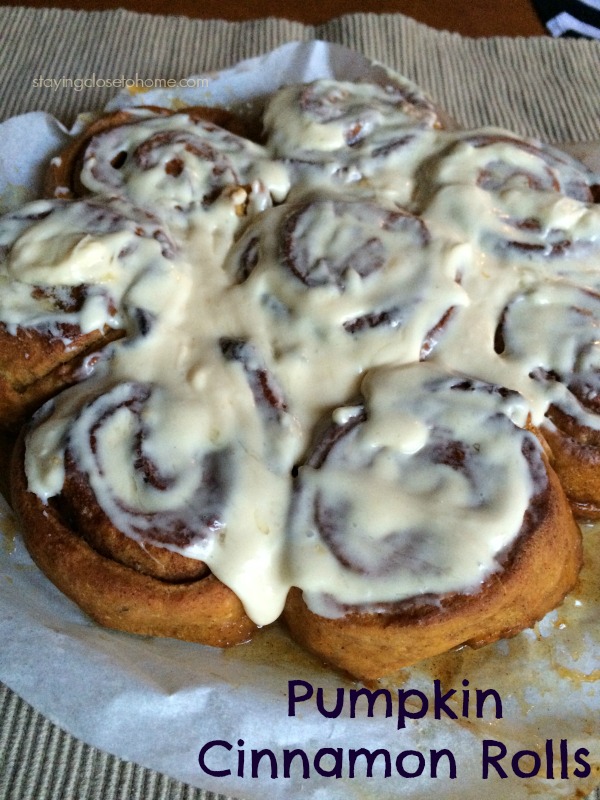 This recipe is relatively simple and I made it the day before, and after the second rising, covered and placed inside the fridge until the next morning when I took it out for an hour to get back to room temperature and rise some more. You could probably even keep it out over night. 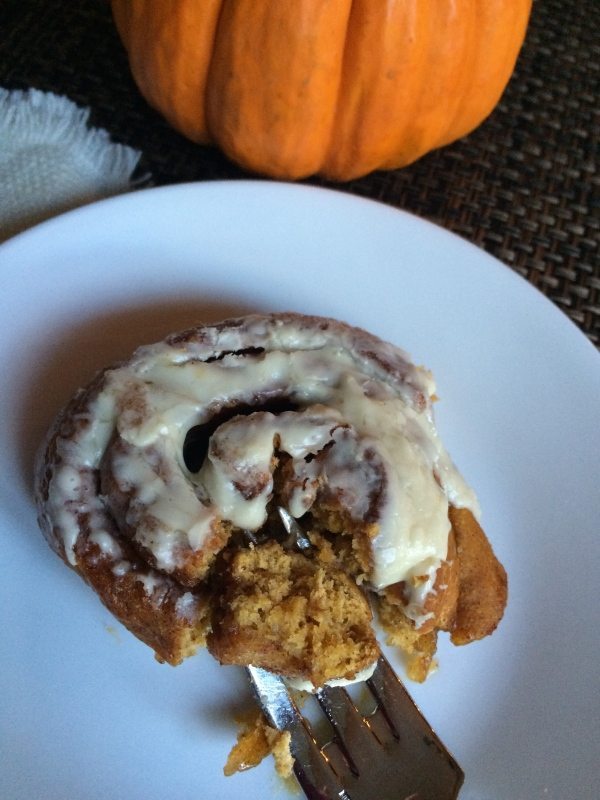 Since the recipe made 16 cinnamon rolls I placed 8 in a disposable round container, an old pie plate, and placed it in the freezer for another occasion. I will definitely take these out the night before serving to thaw and rise again. I have done that with Monkey Bread recipes. 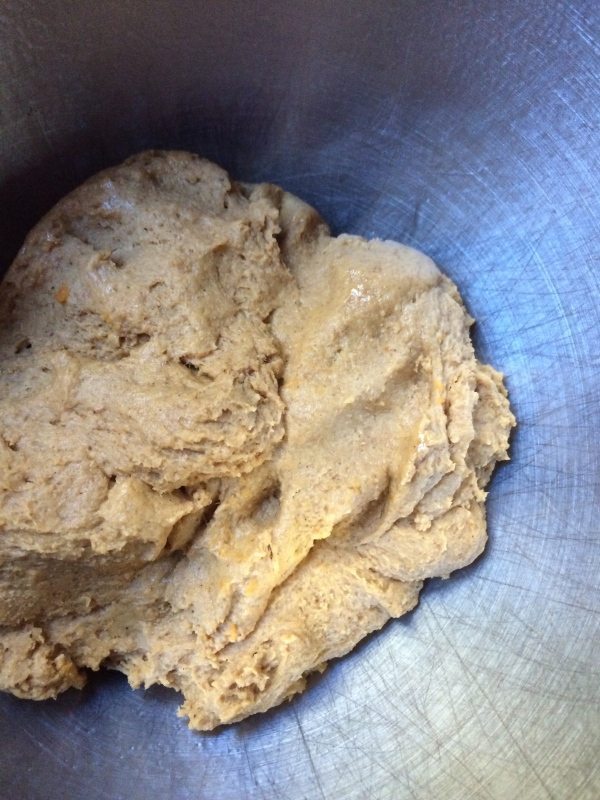 Ok so this photo does not show but it has a wonderful orange tint to the dough suggesting it is pumpkin flavored.

Now rolling it out was easy, the dough was not sticky which I worried about. I rolled it on my silpat like mat which has a ruler on it.

Then simply add the filling, I may like nuts in this next time for a little added texture. 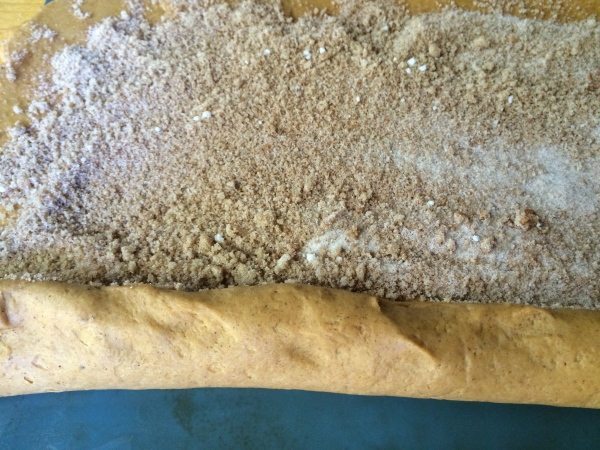 Roll from the long end, tightly was suggested I think it was too loose as the filling came out 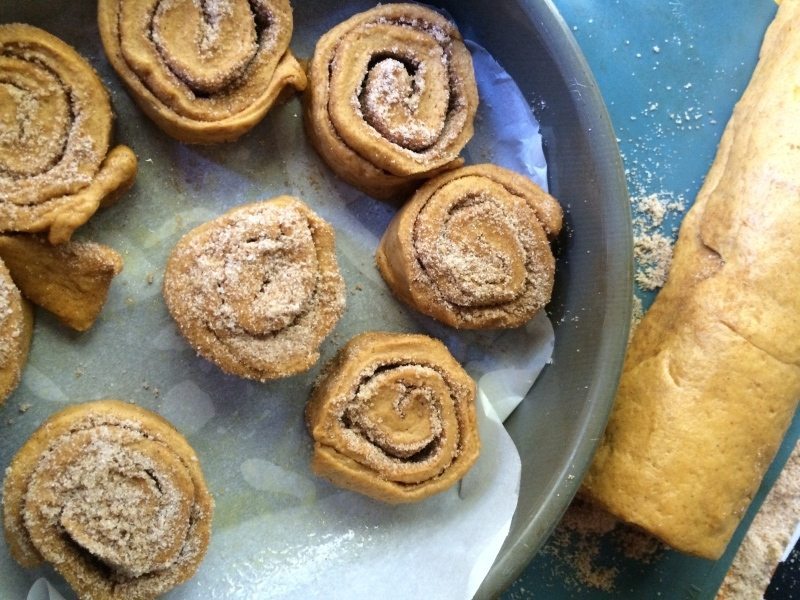 Place in your baking dishes and bake. 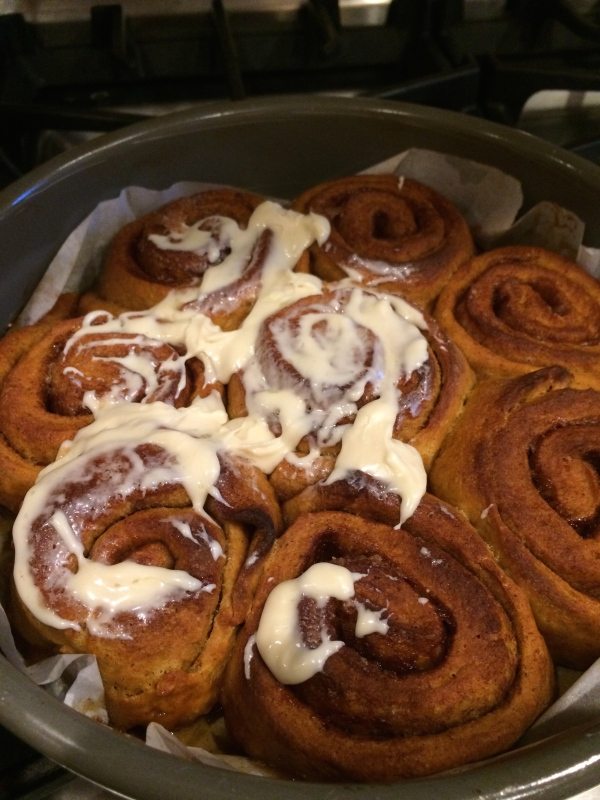 Oops might have left it in too long, no worries the cream cheese glaze will cover this up. 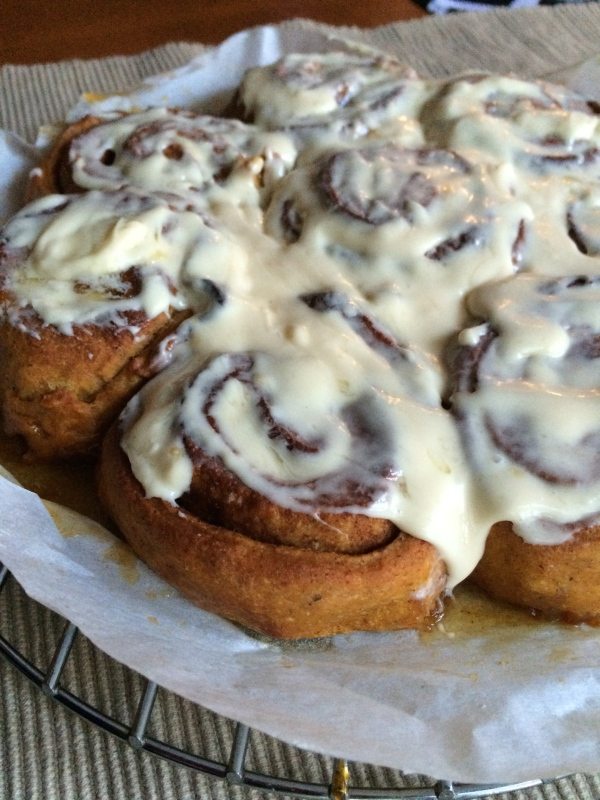 I think it looks beautiful.

Heck it tastes pretty good too. Not as sweet as some Cinnamon Roll Recipe but I was pretty proud.

Melt Butter and set aside. Combine milk and  the yeast and allow to sit for 7-10 minutes.

Combine flour with  cinnamon,  nutmeg, salt sugars, and  ginger. Add about 3/4 of the melted butter and stir to combine. Addd the yeast milk mixture, pumpkin and egg, mix on low to combined, about 2 minutes.

Cover the  bowl with a dish towel and set in a warm, draft-free place for 1 hour.

Turn out dough onto a floured surface and press it into a rectangular shape. If it is overly sticky, sprinkle generously with flour and handle it/flour it until it’s easier to handle. Flour a rolling pin and roll the dough into a large rectangle about 16 inches by 11 inches.

Starting at the top roll the dough toward you into a large log. Roll it tightly as you go so the rolls with be nice and neat. When it’s all rolled, pinch the seam closed and turn the roll over so that the seam is facing down.

Slice 1/2 to 3/4 inch slices and place them in the buttered pan(s). then sprinkle them with remaining sugar/ cinnamon mixture. Allow them to rise for 20 minutes, then bake for 15-18 minutes or until nice and golden brown around the edges.

While the rolls are baking, making the frosting by combining all the frosting ingredients in the bowl of an electric mixer. Beat until fluffy. Allow them to cool slightly and then frost. and serve.